What is Apostille and Legalisation?

Legalisation of a document is the implementation of a certain number of formal procedures in order to make the document legal in the territory of another state.

The Hague Convention Abolishing the Requirement of Legalisation for Foreign Public Documents, also known as the Apostille Convention or the Apostille Treaty is an international treaty which provides the procedure by which a document issued in one of the signatory countries can be certified for legal purposes in all the other signatory states. Such a certification is called an apostille. It is an international certification comparable to a notarization in domestic law, and normally supplements a local notarization of the document.

Apostilles are affixed by the “Competent Authority” designated by the government of a state which is party to the convention. In the Irish State, the competent authority is the Department of Foreign Affairs & Trade.
In the United Kingdom, all apostilles are issued by the Foreign and Commonwealth Office 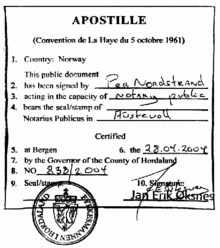 An apostille issued by Norwegian authorities.

The apostille itself is a stamp or printed form consisting of 10 numbered standard fields. On the top is the text APOSTILLE, under which the text Convention de La Haye du 5 octobre 1961 (French for Hague Convention of 5 October 1961) is placed. This title must be written in French for the Apostille to be valid (article 4 of the Convention). In the numbered fields the following information is added (may be in official language of the authority which issues it or in a second language):

The information can be placed on the (back of the) document itself, or attached to the document as an allonge.

Four types of documents are mentioned in the convention:

A State that has not signed the Convention must specify how foreign legal documents can be certified for its use. Two countries may have a special convention on the recognition of each other’s public documents, but in practice this is infrequent. Otherwise, the document must be certified by the foreign ministry of the country where the document originated, and then by the foreign ministry of the government of the state where the document will be used; one of the certifications will often be performed at an embassy or consulate. In practice this means the document must be certified twice before it can have legal effect in the receiving country.

The exceptions to this rule are certain types of documents that cannot be legalized, as well as some countries with which Ireland has concluded a bilateral agreement, abolishing the requirement of legalization.

Legalization of a document is always carried out in the country in which it was issued and / or completed.

When is legalization not required?

Document legalization is not needed in three cases:

when the institution where you submit the document does not require its legalization;

when there is a bilateral agreement concluded between Ireland and the State, on which territory you plan to use the document, abolishing the requirement of legalization;

Get every new post delivered to your inbox
Powered By WPFruits.com
This site uses cookies: Find out more >>